..Because the time is running out.

This is an open invitation to ALL to join  this experiment

I am back in the US,  once again, not over a happy occasion.

My last visit  was in March, 2009, to attend my mother's funeral. I am here this time, July, 2012, for my aged father, who was fighting a critical ailment, and ultimately succumbed to it on 29th July. But this post is not about my parents tragedies, rather it is about my personal journey between these two events(visits),

The World had just witnessed a recession a year prior to my last visit, and the epicenter was USA. So, I could witness the adverse impact it had created on the common man  on street in the US then. Several people had told me that they were deprived of a meal every day as their budget for their daily lunch ( a burger and a coke for US $6.99) was consumed away by the escalated fuel prices to meet their daily travel requirement for work. I thought people were re-looking at their lavish life style.

Browsing the net then, I had tumbled upon an interesting resolution some one had made- 'not to buy any thing new, except the stuff for personal hygiene, and toiletry needs for one calender year.' Several thousands vowed to join this experiment. I was curious, and silently desired to be part of it.

Within a few days of my return to India, I broke my wrist watch. I was aware of my commitment to the experiment, and so, I fought the desire to go for the purchase. My gain was becoming consciously aware that my cell phone showed me the time! I really did not need to replicate the facility!

But the next casualty was my cell phone itself when a thief stole it away, one rainy night, from the open window. Now this was tough, a great challenge. Isolation from the people, in business and otherwise, was not bargained for. I desperately needed  a replacement. A thought  crossed, to be honest, that since I had not spoken to any body about my experiment, I could quietly bury it, and buy  a new instrument. But a little voice from within revolted, 'haven't I told to myself ? How could I cheat my own self?' And  so, my experiment survived. New gains and learning followed as I went about finding a solution. I learnt that about 5 million cell phones were produced and sold every day, world wide. A huge number of them were  replacements in the name of technology, style and competition. It meant a huge numbers of them would be lying with people not being used, though useful (a la clothings, foot wear,many home appliances, electronic gadgets etc, etc)!

I decided to acquire a discarded, second hand cellphone from within the friends circle, declaring about my experiment. And it had a dramatic impact on many as creators of e-waste, and feeling guilty of being part of 'consumerists' society. The enormity of the problem started dawning on them.

My acquired cell phone is still working till this day!

The next in line was my clothing. The running pairs of pants and shirts had begun  fading/tearing, but the strength of the resolution made helped me examine my wardrobe, and that of my grown up sons, and I have pulled on for the past 3 years by pulling out the less/rarely used clothes.

The calendar year was over long back, but the experiment stayed on  And my gains were a lot of insights:
That one can live by REFUSING a lot of wants. The quality of life does not get compromised.
That by reducing consumption, one can feel richer! And the saved money can be used for reaching out!
That buying more is a sub conscious habit. Becoming aware helps overcome it.
That your world view about money can change. For better.
That Greed can be tackled effectively.

So, Refusing  is the first R. The most important R.

The second, third and the fourth R's I learnt from Mr Dileep Kulkarni, and Prof R Rajagopalan, both eminent environmentalists. Solutions to the complex issues like Carbon footprints, global warming etc   got simplified  at my personal level. when I adopted the other Rs, viz, Reduce, Re-use and Recycle. I have reduced drastically my air travels, I am increasing the use of public transport.

Reuse and Recycle concepts are helping me discover many innovative ways of saving material and energy at home.

Coming back to my present trip to the US, I am saddened that the basic 'consumerist' attitude with average citizens here has not changed much. Consumption is still being linked with 'afford-ability'. Youngsters here are on the opium that, "'they' do have a solution, and will be revealed to us at the appropriate time, and hence, we need not change our life style!"
My fear is, 'THEY' will keep the whole world opiated, and that would be a disaster.

My urge here is to shake off the opium, ignore 'THEM', and join this, 4R Experiment. It is worth doing.
Do leave your decisions, comments etc here.

Email ThisBlogThis!Share to TwitterShare to FacebookShare to Pinterest
Labels: Power of one, Sustainable living

A brief history of India, in 3 pictures: 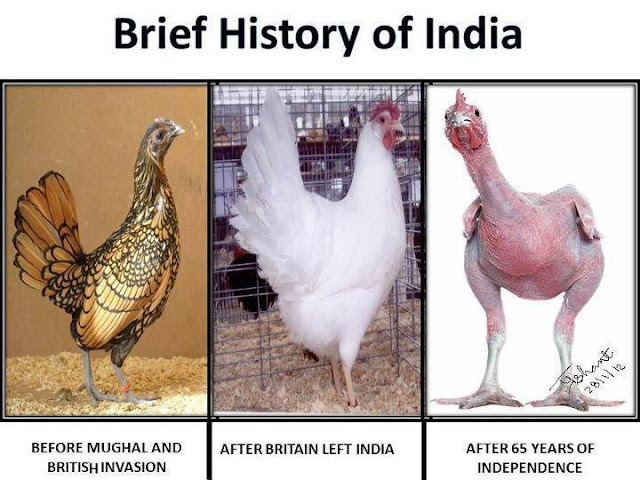 Ler us have your thoughts - WHO IS RESPONSIBLE?

..A lesson from father to his son.

Here is a story of a bright, young MBA student. A story of courage to apologise, to say sorry where usually it is most difficult to do so! In return, he finds a whole new opening. Change from within, for better, could be a very huge deposit into one's own character bank! Read the story in his own words..

﻿﻿ ﻿﻿﻿﻿﻿
My name is Sujeet Kumar and am pursuing my MBA from KJ SIMSR, Mumbai. My parents stay in Katni (M.P.) but our roots are from Bihar.
Well for past few years Bihar has been doing quite well on the development front but 6-7 years back it was not so and people from Bihar were looked down with  disgust by people from other states. In my engineering days, some friends of mine from Andhra Pradesh were afraid to have friendship with me when they came to know I am from Bihar. The more disturbing fact for me was that a couple of friends of mine from Bihar tried to hide their background and state. One such friend of mine used to say she is from a metro city and of course no one could have doubted her because she is smart, intelligent and very well behaved. But it gradually filled bitterness inside me for her, and that grew stronger and I started feeling uncomfortable when she was around. I could not understand why a person will not want to relate to her motherland.
After coming to Asia Plateau in one of the sessions (quite time), I realised I have never spoken with her on this and judged her without hearing her out. I sent her a mail apologising for my bitterness towards her and why I felt that way. To my happy surprise she replied back and told how people use word BIHARI for all the wrong reasons and how it makes her feel bad. It was a relief for me and I hope we can be better friends again.
Well, apologising to people is not easy, surely not to friends. We find it easier to apologise to strangers even but with friends it is tough. But when it comes to family , it is the toughest one.
﻿﻿﻿﻿

People usually wait long enough to say sorry to the closest ones. I took 9 years...
This incident goes back to year 2003. It was one of those incidents which had the capacity to change the way I live or think. But I oversaw this incident and moved head in my so-called busy life. In one of the quiet times in Asia Plateau this incident flashed in front of my eyes and I started feeling restless.
Back in 2003, when I was preparing for engineering entrance examinations my father called me after the results were out. I had got a terrible rank and when asked I lied about my rank but convinced my father to allow me to take a year drop for a better rank. A couple of weeks later the official scorecard reached my home and father came to know about my actual rank. He called me and said “I got your scorecard”. I changed the course of talks and started talking about my studies and all. I felt guilty about lying to him but could not gather enough courage to apologise to him. 3 months later I went home for y diwali vacations. My father called me one evening and he was sitting on the floor with a bowl of water on his left and a small sack of wheat on his right.
﻿
﻿

My father kept silent for 2 minutes and then said “These wheat grains are all those things that you say to others, lies or truths or whatever. With the passage of time some of those lies will come floating on the surface like these husk particles and then people will see your lies only. They will ignore all your truths even if your lies may be few in number.”
I was filled with guilt, went to my room and cried for sometime but could not dare to apologise. After I remembered this incident I lost my peace of mind. I wrote a letter to my father apologising for all my mistakes and lies. Well not all because then that letter would have run into dozens of pages but I mentioned it too that I can not cover all the mistakes in this letter.
But after writing that letter too I could not post it for 5 days, finally I posted that letter. My father called me after receiving that letter and we had a long talk. I felt so good and so close to him after that talk.
I believe I have made a new start. And I had to release my past to free my future. I am thankful to Asia Plateau and quiet time for providing me with this insight.
If you liked the story, do leave behind your comments please.

What lessons can we learn from this crow? Even crows at Asia Plateau imbibe the essence of India I Care :-)

Picture and the thought courtesy Neha (Ishika) Mukherjee
Posted by Dilip Patel at 10:25 pm No comments: