I was curious, it was my first occasion to participate in a bloggers meet.

I had a hunch, I would be outnumbered by the youth, the Indigo generation born after 1980. I was proved right. But I did not feel out of place. All the youngsters on my table showed courtesy and curiosity about me. They showed interest, and respect. They were full of life, and technology.

The hosts, Rajiv Makhni and Vikas Khanna charmed the audience with their gift of the gab and instant humour. They displayed both, width and depth of human understanding. The Nokia apps they demonstrated were fun.

Cross section of bloggers who went to the stage for the 30 seconds fame gave a glimpse about their nature, purpose of blogging and their leanings. Some were introverts, some find blogging as a medium for expressing their feelings, some use blogging as a tool to connect with desired section of the global society, some one blogs to win prizes and some one blogs on sex!

I knew they will have reserved slot for the senior citizens and I got that opportunity to expressed myself. And that was the moment of fulfillment for me as I could speak a few sentences about my purpose of blogging- India I Care, rebuilding the Character Bank of India. Vikas Khanna thought my presentation deserved a prize! But the real prize for me was a lot of young men and women showing interest in India I Care theme. I have found some of them already exploring the blog.

May be, all the readers would like to explore this concept of starting to make 'deposits' into their account in the Character Bank of India, and reduce 'withdrawals' consciously so that the depleted bank account starts rising in the net credits. The tag of 'a corrupt', or 'a dirty', or 'undisciplined', 'unpunctual' or 'insensitive' country etc. must go. Please explore-
www.indiaicare.org.

Dilip
Posted by Dilip Patel at 12:19 am No comments:

Email ThisBlogThis!Share to TwitterShare to FacebookShare to Pinterest
Labels: Tools for propagation

..to celebrate the pinches!

This post has been published by me as a part of the Blog-a-Ton 33; the thirty-third edition of the online marathon of Bloggers; where we decide and we write. To be part of the next edition, visit and start following http://blogaton.in/">Blog-a-Ton
. The theme for the month is 'Celebrations'


It was Navarathri celebrations invitation from a very dear friends Sampath and Kalpana a fortnight ago. Driving to the other end in Bangalore is not exactly a pleasurable experience. However,an exhilarating Bharat Natyam performance by Sathyanarayana Raju at their home was worth going through the hassles on road of worse kinds. Two main performances, one conveying the story of Krishna's childhood and the other depicting Hanuman in Lanka in search of Sita were mesmerising.

Two things touched my heart. One, this, Bangalore's highly celebrated male Bharat Natyam Dancer Sathya's humbleness, and two,an insight given by a young, talented NID alumnus Ramya about design from the performance of Sathya.

Kalpana's mother, in her '80s, suffering from crippling arthritis had met Sathya last 25 years ago. He was not a celebrity then. But now, riding the wave of his popularity and lime light, he fulfilled the desires of this old lady in the wheel chair by coming home and regaling her with his dazzling performance. It was the performance for only the eyes of Kalpana's mother, rest of us only filled up the extra space. Sathya's gesture and humility touched my heart.

Ramya got excited as she could 'understand' now, after several years of leaving NID, the premier Design Institute of India, what her professor had asked them, the students to learn - to 'Design what is not seen (absent)'.  Sathya, in his both the story-song performances could make all of us 'sense' the presence of the related characters in the story such as small new born baby Krishna, giant river, witch Putna etc in Krishna story, and Sita, trees, fire etc in Hanuman story, even though these characters were not being portrayed by any other dancer on the floor. It was a solo performance by Sathya. And I learned it from Ramya without going to the NID! 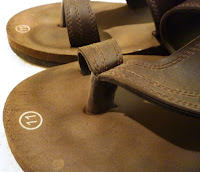 It was pretty late in the night, and so, I slipped into the chappals in the darkness and left in a hurry. I experienced some obstructions from the chappals while pressing the cluch and brake pedals in the car. Somehow I managed reaching home, and hit the bed only to wake up late in the morning.

But as soon as I slipped my feet in to the chappals in the broad day light I felt some strange sensations in my feet.Something was not matching.  The depressions of the heels and the toes on the chappals were not 'mine'! As I looked down, I found that, while the brand and the design of the chappals were the same, what I had bought was no.8 where as presently I had stepped into no.11. Big chappals for my feet! Obviously I had 'stepped into another's shoes', so to say! They turned out to be Sampath's chappals. Now, Sampath is a globally acknowledged trainer/facilitator in values and business excellence, and I had stepped into his 'large' chappals. I decided to walk a few miles in his chappals.

Last 15 days, while in Sampath's chappals, I have become aware of my sensitivities, adjusting the inadequacies and remain aware of the present moments!

Now that is what I call 'Celebrating triple learning"

I will return Sampath's Chappals with thanks.


The fellow Blog-a-Tonics who took part in this Blog-a-Ton and links to their respective posts can be checked http://www.blogaton.in/2012/11/rules-and-reminder-for-blog-ton-33.html">here</b>

. To be part of the next edition, visit and start following http://blogaton.in/">Blog-a-Ton. Introduced By: browsing the net, Participation Count: 01
Posted by Dilip Patel at 1:19 am 14 comments: